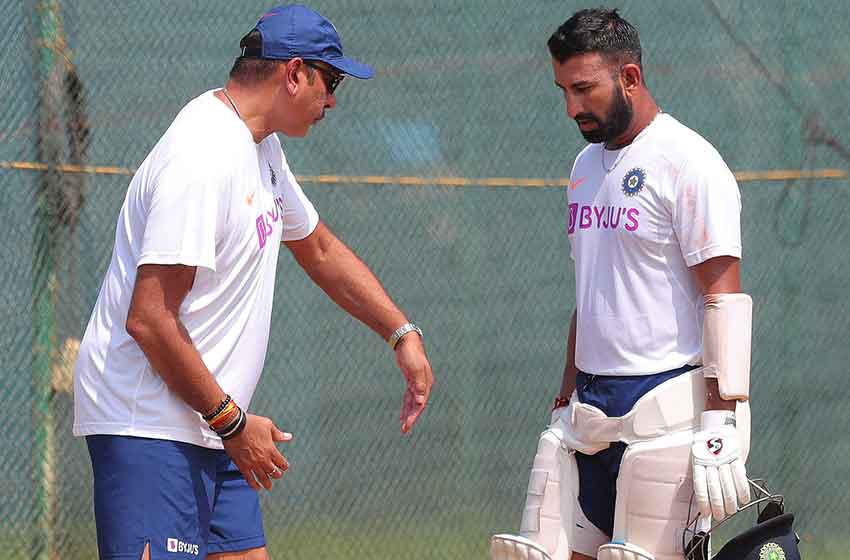 The members of the Indian contingent to Australia, who are not part of the ongoing Indian Premier League, have reached Dubai and joined the bio-secure bubble.

The Team India will be flying to Australia directly from Dubai after the IPL 2020 final on November 10.

The support staffs were also joined in the Emirates by Cheteshwar Pujara and Hanuma Vihari. The “Test-match specialist” duo had not found a favour with the IPL franchisees.

The members arriving from India will stay in isolation for six days.

“The head coach and his team arrived yesterday. They are now in isolation and getting their three mandatory RT-PCR tests done. There is a separate bio-bubble created for the support staff along with Cheteshwar Pujara and Hanuma Vihari,” PTI has reported an anonymous BCCI source as saying.

Pujara and Vihari are expected to train at the ICC Academy in Dubai on completion of the six-day isolation period.

Sri Lankan throw down expert Nuwan and India’s Raghu will be helping out the two Test specialists during their training session while their teammates complete their IPL engagements.

Vihari was in fact doing his nets along with Sridhar in Hyderabad and Pujara was training at his own academy in Rajkot after most of the lockdown restrictions were lifted.

Meanwhile, an undisclosed member of the Shastri-led support staff has been diagnosed positive for COVID-19 infection. According to national daily Indian Express, the member will join the rest of the contingent in the UAE after getting a COVID-19 negative confirmation.

“The support staff member has been kept under quarantine and only after his test turns negative will he be allowed to join the team in Dubai,” the daily has quoted a BCCI source as saying.

India is expected to travel with a 30-member squad across three formats for their tour of Australia with another 20-odd support staff which will make it a jumbo 50-plus contingent touring Down Under.

Sydney and Canberra are likely to host the two white ball series (T20Is and ODIs) while Brisbane, Adelaide, Melbourne and Sydney are the venues of the four-match Test series.

The D/N Test match is scheduled in Adelaide. Cricket Australia is yet to send the final itinerary to BCCI as quarantine rules of one Australian state differs from the other.