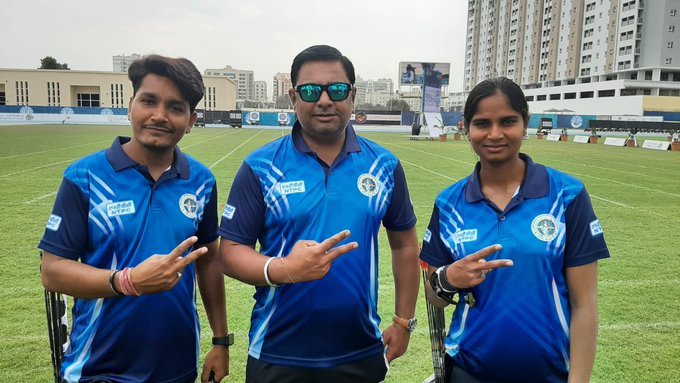 Said Harvinder, an Asian Para Games gold medallist: “The weather was perfect today and we took the advantage of that. I and Pooja have trained back home in similar weather. We won the semi-finals via tie-up and we became more confident once we were in the final. The pressure was also less as we knew that we would have a medal.

“For me personally, I was getting an opportunity to get my old rhythm back. I had the same feeling which I felt during my gold medal match at the Indonesia 2018 Asian Para Games. It was a good learning experience here.”

Meanwhile, the Turkish team swept the podium in Combined W1 event at the Dubai Club for People of Determination grounds on the day.

“The team works really hard and knows what they want to achieve. Our focus is clear. We now want to continue this momentum at the Tokyo 2020 Paralympic Games,” said the 28-year-old from Istanbul, who will seek a quota at the last qualifying event in the Czech Republic.

The Men’s and Women’s Recurve and Compound Open Finals will be played on Friday, the last day of the Championships.

On Friday, back-to-back Paralympic champion Zahra Nemati from Iran will be in action in the Recurve Open Women’s final, while India’s Swami and Rakesh will vie for the Compound Men’s Open gold. India’s Baliyan will face Russia’s Stepanida in the Compound Women Open gold medal match.

ISL: NorthEast just one point away from sealing playoff conquest